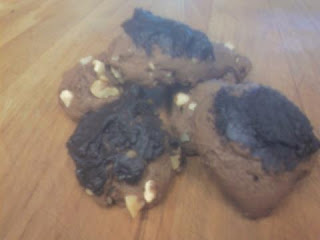 When I first started this project about a year ago, I went through ALL of Grandma's recipes and sorted them out making piles according to various categories like:  Biscotti Recipes, Grandma's Creations, Main Courses, etc. and set aside all the ones I thought would be most appealing, most wanted - especially if they were also marked "Very Good" and I put them in the stained glass recipe box Grandpa made for Grandma (sadly, it no longer has a lid, which was the colorful part).  I wasn't going to bake cookies today...really, but as I was going through them today to decide which ones to work on for the next several upcoming posts, I stumbled upon this recipe and it was so easy and sounded so tasty that I decided I would bake them up today, take a photo or two and post this recipe immediately. 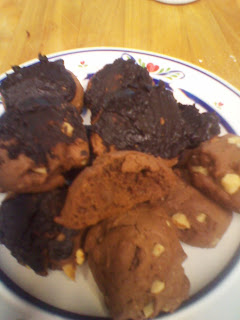 I haven't even frosted them yet (although I will have by the time this post is published) and they are already very tasty.  They reminded me of German Chocolate Cake as they went together and their flavor does not dissappoint.  In fact, they have a cakey texture too - and I'm willing to bet they'd really taste like German Chocolate Cake if you topped them with coconut-pecan frosting instead of the chocolate frosting the recipe calls for (I just may do that).  I hope you like them!

Beat all of the above together until creamy.

Add the flour and soda to the mixture with the buttermilk.  Beat all together.  Stir in 1/2 cup nuts.  Drop rounded teaspoons on greased baking sheet.  Bake at 350 degrees for 12-15 minutes.  Frost tops with chocolate frosting.

Chris' Notes:  I used butter in mine (if I'm going to put an essentially solid fat ingredient in my baking, it's going to have full flavor) and I didn't have buttermilk in my fridge, so I used cultured buttermilk solids (you can find it in the baking aisle at the grocery store, it's a powdered form of buttermilk and you mix it with water according to the package directions).  This may have made my dough wetter than it would have been with actual buttermilk since buttermilk is usually pretty thick.  At any rate, my dough was more like cake batter and no way was it going to drop onto a sheet for baking and come out anything but a pancake so I added flour 1/4 cup at a time until it resembled cookie dough.  I only added nuts to half since we have a non-nut eater in our household.  I used walnuts, but if I were going to frost them with coconut-pecan frosting, I'd use pecans instead.

Update note:  I finally frosted them - with chocolate frosting this time around and I actually like them better without the frosting!  The ones I made with the nuts are my favorite and next time I make them, I will definitely frost them with coconut-pecan frosting and see how they come out!
Posted by Carbone Recipe Blog at 4:24 PM

I love to hear from you!